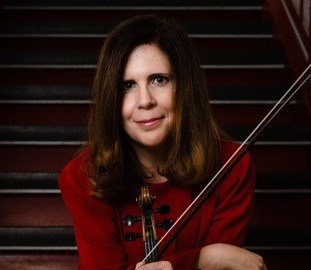 A dynamic, versatile, and intuitive violinist based in Halifax, NS, Gillian Smith released her debut solo album, Into the Stone, on the Leaf Music label in September 2019.  This album features works for solo violin by Kati Agócs, Alice Ping Yee Ho, Veronika Krausas, Chantale Laplante, and Ana Sokolović .  David Olds of The WholeNote magazine called it “a stunning debut album by a rising star”, and La Scena Musicale wrote, “Gillian Smith demonstrates a great skill and mastery…magnificently appropriates Canadian repertoire”.  A track from the album, Inside the Stone by Veronika Krausas, was selected by Spotify as a Classical New Release pick in September 2019.

Gillian Smith has recorded two CDs with members of the Acadia New Music Society on the Centrediscs label: Live Wired, which features the music of Derek Charke, Jérôme Blais, and Anthony Genge, and In Sonorous Falling Tones, which features the music of Derek Charke and which was nominated for an East Coast Music Award for Classical Recording of the Year in 2018.  She can also be heard on a recording of the chamber music of Carmen Braden, Songs of the Invisible Summer Stars, which was released on the Centrediscs label in September 2019.  Her solo and chamber music recordings have been broadcast on radio on stations across Canada and in the U.S. and the U.K.

Gillian Smith has appeared in recital and as a chamber musician at such series and festivals as the Acadia Performing Arts Series, the East Coast Music Awards, Inner Space Concerts, the Music Room Chamber Players, Open Waters Festival, Shattering the Silence Festival, and Sunday Music in the Garden Room, and at the Glenn Gould Studio in Toronto.  She has also performed and recorded as an orchestral musician with the Minnesota Orchestra, the Winnipeg Symphony, and Symphony Nova Scotia.

A dedicated teacher, Gillian Smith serves as instructor of violin and viola at the Acadia University School of Music and as head of the upper strings department at the Maritime Conservatory of Performing Arts.  Her students have won top prizes and awards in local, regional, and national competitions.

Gillian Smith holds degrees in violin performance from the Eastman School of Music (B.Mus.), the San Francisco Conservatory of Music (M.Mus.), and the University of Minnesota (D.M.A).  Her teachers have included Jorja Fleezanis, Camilla Wicks, Peter Salaff, and Philippe Djokic.